When people refer to “carpet moths” or “clothes moths” they are really referring to two distinct species of keratin-eating insects. Similar in behavior, these moths get their names from the subtle differences in how they build their cocoons.

The webbing moth (Tineola Bisselliella) is the more common of the two, with a body about 1cm in length and a distinct golden appearance. Webbing moth larvae are hatched in silk-like cocoon webs.

The casemaking moth (Tinea pellionella) is a slightly larger species of moth that also eats keratin. Instead of weaving a cocoon of silk, these moths build a cocoon made of fibers from the local environment.

The flight pattern of both species of moth is haphazard and non-linear. Although these insects can see, they are poor at identifying humans and seem completely oblivious to their presence. Often, they will fly right up to people and indiscriminately land on them. This suggests that the clothes moth has poorly-developed eyesight, unlike the keen vision of a housefly or bumblebee. 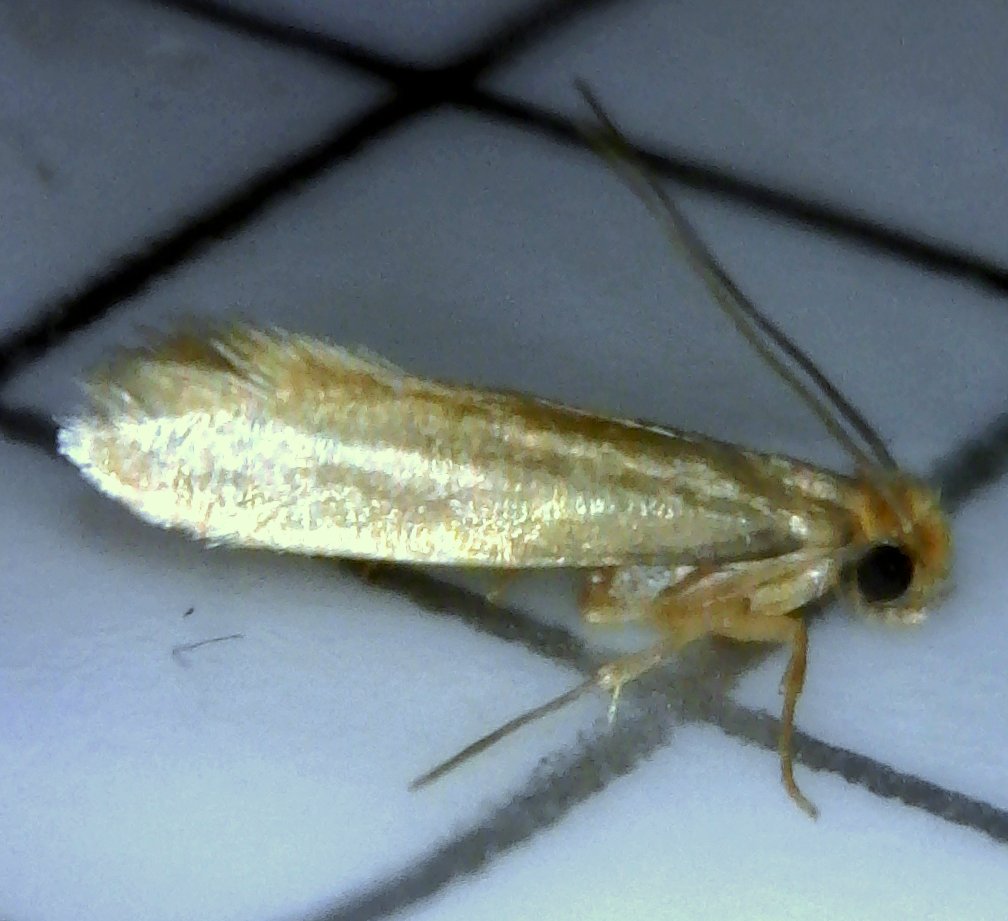 Also known as the “common clothes moth,” the webbing moth is a household pest in the United States and Europe. These creatures are quite small, often no longer than a half inch long and are distinctly different in appearance than their outdoor moth cousins. They have a light tan color with two wiggly antennae and a jittery pattern of movement. The wings do not have spots and are uniform in color. Their heads have a small tuft of tan-colored hair. Typically, adults live for three weeks, where they will fly around the home in pursuit of mating opportunities. They subsist on a diet of mostly wool and silk fabrics. 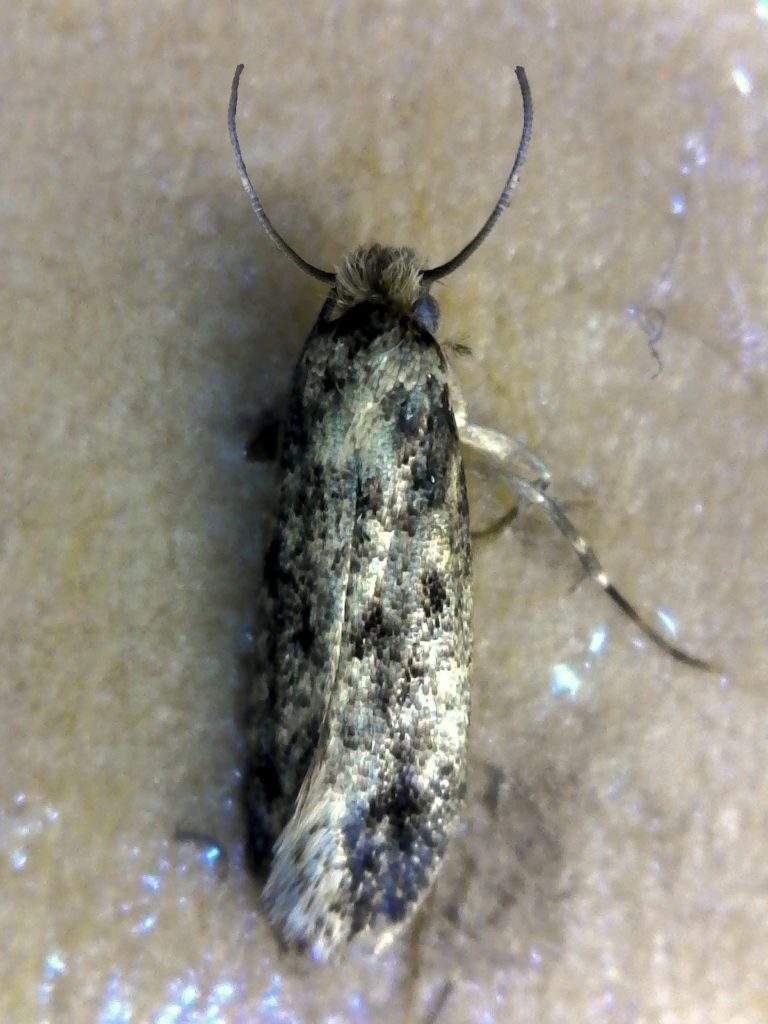 The casemaking moth is less common than the webbing moth, but these insects share a similar life cycle. Brown in color, these moths have spots on their wings and are marginally larger than their webbing moth cousins. A half inch in length is about average for these insects. Like their webbing moth cousins, these insects feed on sources of keratin in wool and silk; however, their diets are slightly more diverse, including dust, cobwebs, vegetables, and wallpaper. Their relatively inclusive diet suggests casemaking moths may be successful in a greater number of environments than the webbing moth, as they could potentially successfully infest a home without laying eggs in the keratin-rich confines of a bedroom closet, or the safety of a silk rug. Often, the eggs of these pests can be found in diverse locations throughout the home, such as inside walls, beneath floorboards, attics, pantries, garages, and anywhere else their food source is in abundance.

Native to Europe, the clothes moth has been transported to nearly every continent where there is human settlement. In the United States, they are particularly prevalent in California and the East Coast. In Europe, there has been a resurgence of the moth’s presence in the UK over the past decade. Although they may live outdoors in temperate climates, they prefer warm, climate-controlled dwellings. They often find themselves in new habitats as the result of clothing or textiles being transported from locations of existing infestation. As nocturnal creatures, clothes moths feel safe in the darkest recesses of your home. They typically rest during the day, although disturbing their habitat (be it a closet, sweater, or other dark place) will send them flying for cover. Often, they emerge from their safe places in the early evening between 8 to 11 pm, when they take flight in search of mating opportunities.

Let's play a game that everyone hates: spot the cocoon.

They Have Long Life Cycles

Getting rid of a moth infestation is not as simple as merely killing the moths.

Females lay eggs in clusters of 50 to 200 per brood. The eggs gestate for a period of one week and later hatch into larvae, which look like small caterpillars. Typically, females will lay eggs directly on the food source, such as a wool sweater, enabling young to begin feeding immediately after they hatch.

Over a period of three to six months, the larvae gradually grow in size until they reach the pupal stage. At this point, the pupae spin cocoons where they continue growing for about a month.

When pupation is complete, the moth will emerge from its cocoon a fully-grown adult. Interestingly, adult moths do not feed; they take flight only to pursue mating and lack fully-developed mandibles. Once a male moth detects female pheromones, he will begin an intricate dance whereby he flutters his wings while walking. This dance can last for upwards of ten minutes. After the male engages in this mating ritual, he will take flight in the direction of the female pheromones to conclude the mating process. At this point, a well-placed clothes moth trap can safely capture the male, disrupting the moth’s lifecycle. 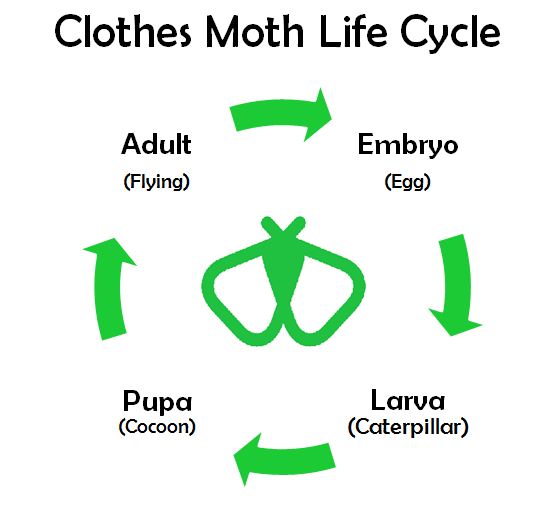